Ruins carved into the mountains - with lots of broken rubble to traverse in the halls. Multiple levels lead down to a cavern where the highest level (and most dotted) mobs live. There is a ritual being performed in the deepest parts of this ruined city of outcasts.[1] 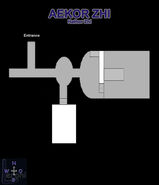 3 dot mobs guard then entrance and only get harder as you progress. Wanderers abound and single pulls are very difficult - if not impossible. Main boss is probably a multi group encounter if you are the level that the dungeon is designed for.

4 named mobs spotted - one in the room down the staircase (drops a plate BP, melee stats), one in the cavern after that room as you progress thru the dungeon (drops plate legs, melee stats), the main boss spawns on the altar in the back of the biggest cavern (drops heroic leather BP, wisdom/energy stats), named drake in the tunnels behind the altar (drops a 2HS axe). Drakes were all singles, not grouped - believe they were 2 dots actually. Very easy compared to the other mobs in the dungeon - including the named.

Mobs here can charm - had my DE racial drake attacking me (even after the encounter was dead) - so kill the casters first.[2]

Retrieved from "https://vanguard.fandom.com/wiki/Aeokor_Zhi?oldid=42651"
Community content is available under CC-BY-SA unless otherwise noted.