Lord Tsang was one of the most powerful users of Jin to ever have lived. During his time, the Jin Masters were very powerful indeed, and understood Jin like none of this day.

When Lord Tsang died, a tomb was erected in his honor, in which Lord Tsang was laid to rest. Many weapons of his generals were also put on display there as well.

Recently adventurers have need to learn more about the ancient powers of Jin lost when the Masters such as Lord Tsang passed from Telon. The Ulvari must be defeated, but before this can happen, adventurers must better learn how to use Jin. The Tomb holds many secrets of Jin, but it will not be an easy task to learn these secrets and leave the Tomb alive, much less get into the Tomb in the first place. 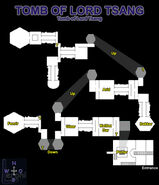 Weapon Quests Housed in Tsang's tomb are several weapons that can be acquired by completing the quests from the corresponding Jin Tablets. You can do multiple weapon quests but only one at a time. If you have more than one in your inventory when you talk to Tsang's advisor he will not talk to you to furthor the quests.

All the stones are random rare drops from the mobs in and around Lord Tsang's Tomb.

After returning to the Jin tablet with the required stones you may collect that desired weapon.

From here you must visit the Spector of Tsang's Advisor at the exterior front steps to unlock your weapons full potential. Talking to the Advisor with the weapon in your inventory will unlock a new quest chain.

Retrieved from "https://vanguard.fandom.com/wiki/Lord_Tsang%60s_Tomb?oldid=32018"
Community content is available under CC-BY-SA unless otherwise noted.