The Oathbreakers have commandeered this mine near Bordinar's Cleft, but for what purpose? Dakon Cliffhammer, a Dwarf loyal to the >FACTION<, has successfully infiltrated their ranks. Perhaps he can shed some light on the situation. Commander Garidon Flintstrike, stationed at the guard tower directly adjacent from the mine, might know where to find him.

The Oathbreaker Caves is a small dungeon, essentially split into 3 short wings. A short series of quests leads you down all three, culminating in a choice of Rare shoulder armors.

Most classes should be able to solo the dungeon and the quests within by roughly level 12. A majority of the pulls are level 9 2-dot Oathbreaker Prowlers, Magus and Sentrys, coming solo or in pairs. However there are occasional (but unavoidable) level 10, 3-dot Oathbreaker Sentinels. In some cases these come as pairs, which can cause difficulty for a solo player. Don't hesitate to use your timered abilities on these. 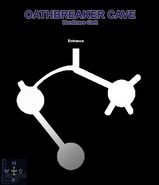 The mines are, it turns out, being used by the Oathbreakers as a source of Mithrill. The Oathbreakers are sneaking Gwartak Kobolds into the mine inside sacks, and using a human Psionicist in their employ to enslave the poor creatures. The dwarves believe Gwartaks are capable of "smelling out" Mithrill -- an assumption Dakon Cliffhammer questions. Nevertheless, relinquishing any source of precious metals to the Oathbreakers is unnacceptable, especially so close to Bordinar's Cleft.

The player will be asked to enter the mines, destroy the sacks (and the Gwartak within), slay the enslaved Gwartak currently sniffing away at the mining site, and ultimately slay Devarus.

From Vanguard Saga of Heroes, a Wikia wiki.
Retrieved from "https://vanguard.fandom.com/wiki/Oathbreaker_Caves?oldid=43424"
Community content is available under CC-BY-SA unless otherwise noted.