Perform a patrol around Themnwar's Shield.

Hammerheart says, "The dwarves here need a wake up call to what the real threat is, because it isn't the alliance."

Hammerhear says, "I want you to run a patrol around the Shield and see if you can find any evidence of a threat. report back to me when you are finished with your sweep."

You notice the corpse of traveller.

Hammerheart says, "Ah! You've returned. What did you find?"

The inquisitor's brow wrinkle in contemplation. "This is bad. Bandit sighting to the East of the Shield is a a grave concern."

"Thank you for your work. I should be able to manage the kind of threats you're reporting," says Hammerheart.

This quest appeared upon completion of Warn the Shield. However, if you don't accept it. He will not offer it to you again.

At the northern point, you will see a message on the screen "You notice an animal carcass, probably a leftover from a spider".

At the eastern point, you will find an Oathbreaker Bandit and a corpse of a traveller.

At the souther point, you find some leftover carrion meat.aaaa 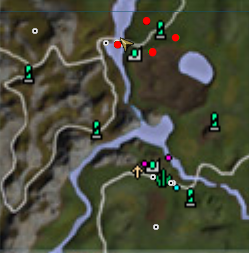 Patrol Points
Add a photo to this gallery

From Vanguard Saga of Heroes, a Wikia wiki.
Retrieved from "https://vanguard.fandom.com/wiki/Patrol_the_Shield?oldid=39471"
Community content is available under CC-BY-SA unless otherwise noted.