Only the remains of Castle Landview can be seen from the hillsides of the Coastal Graveyard. However, a rough opening in the cracked and stony floor will lead down to the cellars and dungeons of the ruin. The Lost Souls of Thestra as well as the ghosts of many fallen Gulgrethor orcs haunt the castle.1

"Cairnworth Hall was one of three castles that guarded these lands; Trengal Keep and Landsview Castle were the other two. All three have fallen into ruin, and all three are haunted by the past." -Adyra Savinth 1 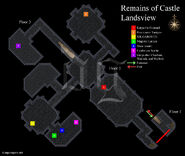 From Vanguard Saga of Heroes, a Wikia wiki.
Retrieved from "https://vanguard.fandom.com/wiki/Remains_of_Castle_Landsview?oldid=32420"
Community content is available under CC-BY-SA unless otherwise noted.