"With this area I was going for an over all dark and twisted feeling of a castle that was destroyed from the inside out. From the inside, one can see the smaller structures such as homes and small buildings were destroyed the worst, alluding to the attack of the orcs from the inside. These objects were created by Joshua Deeb who helped by populating the underground areas as well. The walls and larger structures show the final destruction that would doom the reaming orcs and humans inside. From the outside I wanted people to see the ominous rock floating above the place and wonder what the heck happened here?!

While creating Trengal I had a lot of fun thinking of ways to make the architectural style of the Thestran human and twist it to give that dark feeling I wanted. Over all I enjoyed the whole project, from coming up with the over all design down to the creation of the holes in the walls from the falling storm of rocks. Something I had fun with was the placement of objects, particularly skeletons. I tired to place them in way that might tell a small story of their death.

I have a few favorite parts of the keep but number one has got to be the walls and towers. They form most of the dungeon and are a powerful item that dictates how the player will travel though this small part of Thestra. Next would have to be the ominous floating rocks that pull people in to get a closer look." - David Baldwin, Artist [1

Trengal is a former human settlement that was overran by orcs but it did not simply collapse ... floating stones can testify to that. Level range 22-30 with 4-5 dot mobs.

"The view from up here would be wonderful if it wasn't for the ghosts down in Alicia's Graveyard. Alicia was a pioneer; one of the original nobles who oversaw the construction of Trengal Keep -- Guard Bilel, Brasta's Lighttower. 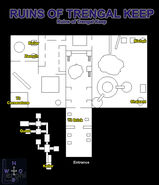 From Vanguard Saga of Heroes, a Wikia wiki.
Retrieved from "https://vanguard.fandom.com/wiki/Ruins_of_Trengal_Keep_(Dungeon)?oldid=32673"
Community content is available under CC-BY-SA unless otherwise noted.