A zone of the southern islands of Kojan. The starter location for all Kojani races is found here, in the village of the same name.

Soldier's of the Emperor's army have been dispatched to put down a rebellion on the island of Shang Village. Many soldiers are torn between the their orders to kill unarmed civilians and their conscience.

Before entering the Village from Character Creation you're given the following notes based on Race:

Honor to your family, Officer.

The Emperor and his Magistrates have entrusted you to assist his soldiers in pacifying Shang Village. Loyalty and justice are the strength of the humans of Kojan, and these virtues must be upheld as the war against the Ulvari and their allies continues. With the fiendish Ulvari pressing in on all sides, the empire can ill-afford rebellion from the Jin Masters taking refuge in this village.

Their connection to the life-force, Jin, is respected, but their disloyalty threatens us all. Too many trust in the magical shield that protects the city of Tanvu from our foes, but the Emperor understands the need for action and the need to adopt an offensive strategy.

The poets of our people stand ready to record the end of the Ulvari incursion to our world. The Emperor has in fact recently invited mercenary elves, Raki, orcs and goblins to assist us with our goals. Though we remain in conflict with the rulers of Martok, the Ulvari threat is grave enough that we will accept mercenaries from any race into our ranks.

Beware those who seek to turn you from the Way of Harmony. Serve the empire, and prepare yourself for battle!

May you walk in the protection of the Glade.

Congratulations, you have been deemed worth of specialized training. Should you move forward to prove yourself through your deeds, you will achieve the respect and admiration of all our people. Should you fail to excel, however, know that all will look you upon with shame.

In a moment, you will find yourself transported to the Shang Village, near Tanvu. While we are not fond of the Kojani humans, we find ourselves allied with them now against the greater threat of the Ulvari. Truly, the Ulvari incursion threatens all of Kojan and perhaps beyond. You will find the humans do not understand the Jin, and our alliance with them will be tenuous at times. Regardless, once you arrive near the Shang Village, report to Master Rahlsu and begin your training.

Your efforts thus far on behalf of the Kojani Empire have caught the attention of the Emperor and his Magistrates. As you assist our soldiers in pacifying Shang Village, remember your heritage. Your people may be shunned by the elves of Ca'ial Brael, but your will always be welcome in Tanvu.

The gods and our connection to Jin have brought our peoples to the brink of glory. All that remains is for a hero to set forth and claim the birthright of the half-elven people. Born of the union of wood elf and human, the heroism of the half-elf race lies in the unique blend of human and elven talents, and the empire respects this strength.

Make no mistake, however: The road ahead is difficult, and while many in Tanvu tolerate your kind, you will always be under scrutiny. The life-force Jin flows differently through your veins, and your hidden talents may inspire fear in others. While the humans of Tanvu follow the Way of Harmony, your course may be a different one. Have faith in your abilities, and channel the life-force of Jin for the greater good.

Through your own efforts, you will be exalted among all races on Kojan.

While you are a citizen of Martok, recent events have changed your fate. While the clans of orcs and goblins have been at war with the humans to the south for quite some time, you have a unique opportunity. The human Emperor has called for mercenaries from all of Kojan to help them with the Ulvari threat. To escape the arguing and feuds that plague Martok, you are heading south to join the humans, to train in their ways, and to help them drive the Ulvari back.

In a moment you will find yourself transported to the Shang Village, near Tanvu. Report immediately to Master Rahlsu and begin your journey. Never forget, however, your true heritage. You are a child born of Ghalnn, God of slaughter, and Lord of Battle. While this Ulvari threat may indeed warrant assisting the humans and other races of Kojan, you will one day return to Martok and be judged.

Claim vengeance upon all those who would do us harm and come back to us one day a champion.

Our people have a fine history of academics and scholastics, but since we have taken refuge here on Telon, we have found a need to broaden our horizons. Wouldn't you know that our small stature and quick reflexes make us perfectly suited to help our hosts investigate the recent uprising within the forest? With so many threats facing our adopted home, we could not sit idly by and do nothing, so we put down our pens and took up arms in her defense.

The noble wood elves took us in when we fled through the portal of Niktarin. We barely managed to survive the retreat from our dying home world, as all manner of fiends crept swiftly across the horizon. The elves took us in and allowed us to begin rebuilding. For this, we owe them an eternity of gratitude.

Recently, the Emperor of the Humans has called for aid from all the races of Kojan. The elves now march to Tanvu to join the others in battle against the Ulvari. By joining the elves we repay them their kindness, for just as we were driven from Niktarin, so also do they fear the Ulvari will drive all races and all peoples from Kojan.

In a moment, you will find yourself transported to Shang Village, near Tanvu. Once you arrive near this village, report to Master Rahlsu and begin your training. 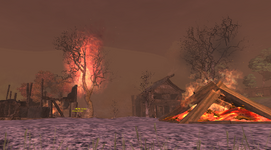 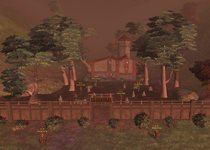 Shang Village Temple
Add a photo to this gallery

Retrieved from "https://vanguard.fandom.com/wiki/Shang_Village?oldid=39475"
Community content is available under CC-BY-SA unless otherwise noted.