The Art of Death (Quest Guide)

Edit
watch 01:36
We're Getting Mutants in the MCU - The Loop
Do you like this video?
Play Sound

At level twenty, Necromancer trainers* offer a group quest called The Art of Death. This quest requires you to travel to a level 20ish dungeon in north eastern Qalia, and do a very easy (aside from getting there) task for a master necromancer, convincing him to teach you the spell Rest of the Dead, which allows you to feign death. If you plan to do this quest immediately (at level 20), you will want a decently sized group, as the enemies in the coven are around level 20, and 3-4 challenge dots. They pull in groups of 2-3 at this level. If you're feeling brave, you can also get someone to cast invisibility on you, or use an invisibility carving, and just try to run through.

Confirmed Necromancer trainers that give the quest are in:

The quest text is as follows:

“The art of death is one that very few can master. However, learning the skills and rites is the easy part. Before you can even begin to practice this power, you must find one willing to pass on to you its secrets.”

“If you wish to harness death, you must seek out Master Vallerex. A man who lives by his teachings, Master Vallerex resides in Kalendra’s Coven just north of the Upside Defense Garrison in Skrilien Point.”

The quickest way to Kaelendra's Coven is to take the riftway to Skrillien Point, and then either ride around the mountains due east of the rift way until you see ruins full of primarily dark elves, or rent a wyvern at Skrillien Point and just fly there. The entrance you are looking for to the dungeon part of the coven looks like a broken hole in the ground, and is in the central-southern part of these ruins (-21442, 40361, 1590). If you need a waypoint, you can pick up one of the various quests at Skrillien Point's Upside Garrison which points you towards the Coven.

Descend the staircase in the hole at the ruins and enter Kaelendra's Coven. At the foot of the stairs you'll find yourself in a small foyer, which usually has a lurking mob in it. A short tunnel will take you into a larger room (full of enemies) with three tunnels branching off of it. Take the tunnel to your right, and follow it all the way to its end. Having reached the end, you will only be able to turn left. Make this turn and again follow the tunnel all the way to its end, which will be a large oval-shaped room filled with enemies, and Master Vallerex whom you seek. Note that just before his chamber and to your left is another small passage leading to a Hall of Detention room full of non-aggressive failing pupils. You'll need to get to these in a moment, so you may want to clear the hallway to them now. Speak to Master Vallerex.

"Master Vallerex stares at you critically, saying, “Know this, Lifebaene. You are here because you were sent to me, not because I invited you to come. I do not tolerate those who are not completely dedicated to the dark arts. Should you fail me, you will find yourself wishing you had never come to this place”

Speak to Master Vallerex again to hear what he wishes you to do: Master Vallerex taps his fingers together and says, “So you wish to learn how to take on the mien of death? Only the most devout can wear the guise of the death so convincingly as to fool their enemy. To merely emulate is to fail. One must have an intimate understanding of death to succeed.”

Master Vallerex grins evilly, “To embrace death is the easy part. It’s training yourself to return to life that’s tricky. Let me show you how it is done. Bring forth a failing pupil!”

As previously mentioned, it's now time for you to go into that smaller Hall of Detention that you noticed just before entering Vallerex's chamber. Do so (whether by invisibility or slaughter) and hail (use /hail or the H key) one of the Failing Pupils there. Nervously, the Pupil will begin to follow you. Take him back to his master and speak to Vallerex for his demonstration.

Upon bringing Vallerex his pupil and speaking to him, he will say the following: 'Master Vallerex gazes into the Failing Pupil’s eyes and says, “Excellent… You will do nicely.”' Speak to him again after the unfortunate death of his pupil, and his demonstration of feigning death, and he should say the following: Master Vallerex says, “Do you now understand the skill required of you to use this ability effectively? This is not a game, Lifebaene. Heed my words if you wish to truly grow in power.”

Master Vallerex grins, “With that said my senses tell me you were wise to come to me. Hear my words one last time, and you shall understand what it means to be dead.”

Speak to him one final time!

Master Vallerex nods, “Go now and master this art, CHARACTERNAME. I have no doubts that you will put it to good use.”

Master Vallerex says I have nothing more to teach you <CHARACTERNAME>. Be gone.”

You'll now find that you've learned the spell: Rest of the Dead. I recommend using Underworld Journey to escape the Coven alone or with your party. Congratulations! 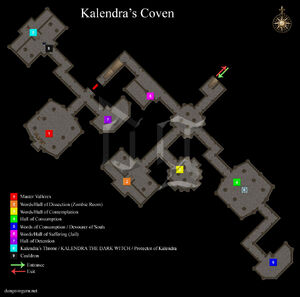 From Vanguard Saga of Heroes, a Wikia wiki.
Community content is available under CC-BY-SA unless otherwise noted.
Advertisement